The natural looking timber home, nestled amongst an array of natives including Pohutukawas and Nikau palms, is rich in heritage and tells an endearing story.

The sun has just risen in New Zealand’s understatedly beautiful Hawke’s Bay. It’s a mid-winter morning and there is a crisp bite to the cool air. The vapour rising from the frost-glazed grass looks like a magical mist as the sun makes its entrée into the day. And orders flow for warm morning coffee at the local coffee caravan.

It’s a classic Kiwi winter wonderland. But as you enter Willie and Annabel Murphy’s sun-drenched new home and workshop situated on beachfront Te Awanga, you would think you had walked straight into a balmy summer day. Facing north-west, the morning sun streams directly across the front deck and into the couple’s kitchen and living areas filling the home with natural light and cosy warmth.

The couple’s recent addition to the family, two year old Ottilie (Tillie for short), is cheerfully scooting around the front lawn on her tricycle, wearing nothing but a singlet and pair of shorts, basking in the warm winter rays. With nothing but fifteen metres of lawn between the home and the endless ocean vista, the family are living the Kiwi dream – a paradise most of the world could only wish for.

Breakfast with the whales

For Willie and Annabel the choice to move back to the Bay after living in abroad for four years, and to set up home, was all about lifestyle and family.

“For us family life and nature is really important” says Willie, a landscape architect who grew up on the East Cape. “We like being able to get up in the morning and go for walks on the beach and just see the ocean.

Some mornings the orcas come up close and we watch them five metres from the shore! They come right in chasing the stingrays. According to Annabel so do penguins, seals and all sorts of other marine life. 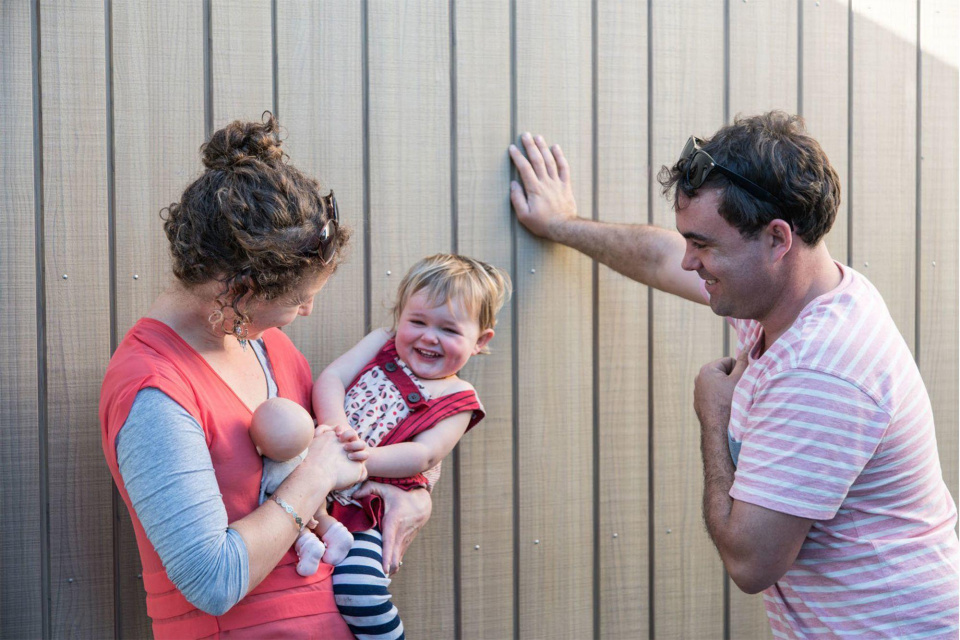 The natural looking timber home, nestled amongst an array of natives including Pohutukawas and Nikau palms, is rich in heritage and tells an endearing story. The new house (now one and a half years old), in Abodo’s Vulcan Cladding, sits on the original site of what Willie and Annabel refer to as the “old shack” – a rundown Kiwi batch that the couple lived in for five years after returning from working overseas and prior to building.

“After we came back from overseas, the plan was to move to Wellington and find an urban job. But we ended up staying (in the Bay) and moving into the old shack. It was sixty square meters and very run down. It was terribly quirky” laughs Willie. “It was so basic and completely falling apart” recalls Annabel. “But we loved it at all the same time and it was great for that time of our lives”. A colourful photo of their quintessential heritage Kiwi shack now proudly takes up prime real estate in the new hallway, reminding the couple daily of their humble beginnings. “We were living right on the beach so we couldn’t complain!”.

But as much as Willie and Annabel loved their small shack on the beach, they say it wasn’t really suitable for renovation or as a place to bring up a baby.

“We looked at renovating the old one since we love the character of old houses. But we would have been silly to even consider renovating that. It would have cost us a fortune! There was bamboo literally growing up through the walls!”. So working with design builders they decided to rebuild – but not entirely from scratch. Both Willie and Annabel were brought up in old houses on farms on the East Cape and in the Hawke’s Bay.

They are also very eco-conscious. So the idea of building a new home rich with a family and character feel was much more appealing than a bland home lacking soul. “We were a bit unnerved about the thought of a new house, that stark white, sterile feel”. The shape of the new family home is based on the old shack and reflects a delightful blend of old meets new. “Having lived on the site already we really knew it and knew what would work for the new build” says Annabel.

To retain its heritage feel, where possible, the couple incorporated as much of the original shack’s timber materials and fittings into the rebuild as they could. And when they did need to buy new building materials, Willie was quick to opt for understated materials and natural, sustainable timbers.

“We quite liked the idea of modernising it while using a bit of the old with the new” he says. The exterior of the home is clad in vertical Abodo Vulcan Cladding, finished in Protector - Straw, allowing the house to blend effortlessly into the site’s natural surroundings. And the fence was built from the weatherboards from the old shack. “That’s why we came back to wood. We wanted something that was beautiful but also gave the home a softer appearance”. But both Willie and Annabel wanted the house to be as environmentally benign as it was subtle. “Being from the Hawke’s Bay we really like the idea of using materials with low embodied energy. So not a lot of transport, using locally grown timber, something that weathers well. We also wanted strong timber products that weren’t unsustainably milled”.

For Willie, Abodo’s carefully crafted timber fitted the bill nicely. One and a half years into the new home, Willie says the cladding has weathered beautifully. Even in the heat of the summer with brisk easterlies blowing in off the ocean. “It’s performing and weathering really well. We haven’t seen any movement or shrinking. It’s just the same as when it went up – and the colour is changing how it is supposed to”.

Further, Willie says the mixing up of Abodo’s wood profiles have allowed for a more authentic looking timber clad. “The grains and different wood profiles show through really well which we really like, and because the cladding has been thermally modified it definitely gives you that deeper, rich timber finish look. We are very happy with it”.

The home’s interior use of timber also exudes heritage, soul and mindfulness. Half of the home’s flooring and bench spaces in the kitchen and bathrooms are made from recycled Matai taken from the old shack and the other half, Rimu, was sourced from Annabel’s dad’s barn built well over one hundred years ago.

“When we pulled down the old house everything was rimu so we restored it all and got it built into flooring and benchtops”. Willie also says the interior walls are lined with ethically and sustainably sourced New Zealand plywood. So the house is a veritable timber fest. A lot of the cladding and plywood walls we were looking at (like Poplar core) came from China, so we chose the New Zealand ranges”. The house definitely has an enviable indoor/outdoor flow with soul to match. Walking from the pillarless corner courtyard into the sunny dining room, Annabel looks out towards the ocean, passionately telling the story of how the polished wooden dining room table was originally part of the old shed located in the exact spot where the new table now sits. “We just sanded it back, hand scraped and hand buffed it”.

A myriad of other little things have also made the Murphy family abode filled with soul and love. “We’ve reused the bath, had it re-enamelled. The same with the laundry sink and outdoor bath that we’ve plumbed out front. I think it’s all those little things that often, you wouldn’t notice if you walked into the house. But together we think they give it soul”.

Even Puka’s kennel, the family chocolate lab, situated in the internal courtyard, was handcrafted by Willie using a recycled wine barrel he sourced from a friend at a local winery down the road. And over the sleeping pooch hang a series of eye-catching lights made from old-fashioned milk vats Willie took from his family’s old farm barn. “It just feels hearty, Willie’s got a great eye!”.

The sweet balance of work and play. What’s more, it’s all about work life balance for this humble Hawke’s Bay couple. A passionate environmentalist, Willie works from home in the Pollen Workshop, a stylishly refurbished timber clad shipping container for his Landscaping Architecture business. Situated a mere ten metres from the main home in the couple’s back yard, he is never far from the family, nor tires of the ocean views, while he works helping his clients improve their landscape aesthetics and environmental footprint.

Meanwhile Annabel, a part time primary school teacher, regularly takes Tillie and Puka bike riding and walking in nature or works on the vegetable patch the couple are planting. “I work two days a week, so it’s a nice balance”. There’s no doubt that when lifestyle, design and the environment are concerned, this Hawke’s Bay couple have got it right. Despite strong summer sea breezes the house is always open, warm and occupied, both for work and play.

“We’ve always got the umbrella up. We can have the sea breeze blowing a gale and still be out here in the middle courtyard. It’s a great space for kids”. “You just feel like you’re on holiday all the time” says Annabel. “We’re pretty lucky, that’s for sure”.

Willie and Annabel’s emphasis on lifestyle and upcycling materials from their previous beach side shack even goes so far as to include outdoor shower and bath time – all year round.

And when you live five metres from one of the most pristine beaches in New Zealand, it would be almost rude not to!

The old shack’s bathtub, plumbed with hot water situated in the front yard overlooks the ocean. “On a clear, starry winter night there is really nothing more special than soaking in a warm tub with a glass of wine, listening to the waves crashing” says Annabel.

An outdoor shower, frequently used by family and friends, with views of Te Awanga beach and complete with its own Pohutukawa growing inside is another endearing feature.